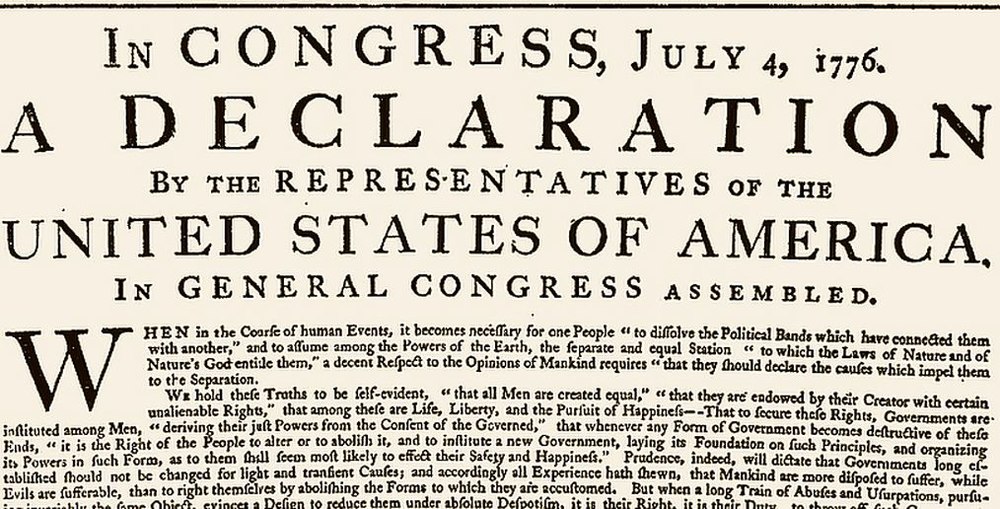 I love our country. I specifically love that we are a Christian country. I don't mean that every American is a Christian--that's never been the case--but it is a statistical fact that for all of our country's history--from the colonial era, right up to 2018--the great majority of Americans have self-identified as Christian. Today, according to the Pew Research Center, 70% of Americans call themselves Christian.

We all know that the United States became a country with a famous document called The Declaration of Independence, authored by Thomas Jefferson and others, and adopted by the Second Continental Congress on July 4, 1776--242 years ago this week! It was directed to King George III and asserted that, “in the course of human events," it had become "necessary" for America to declare its "independence" from Britain.

A lot has happened since Thursday, July 4, 1776--lots and lots of history! At the very beginning, John Adams, one of Jefferson's distinguished co-authors, and a future President,  observed: "I am apt to believe that [Independence Day] will be celebrated, by succeeding Generations, as the great anniversary Festival. It ought to be commemorated, as the Day of Deliverance by solemn Acts of Devotion to God Almighty."

Adams was at least partly right about celebrations and "the great anniversary Festival." How many fireworks displays have we all seen? How many parades? How many patriotic speeches? How many swimming parties and cookouts and watermelon cuttings? At 59, I can remember dozens and dozens of July 4th celebrations (and I'm looking forward to this at the Scott family's home).

But when did you last commemorate July the 4th with a "solemn Act of Devotion to Almighty God"? When did you last pause, in the midst of celebrating with family and friends, to reflect seriously on July the 4th as a "Day of Deliverance." Again, I'm 59 years old, and I'm not 100% sure I've ever done that.

This Wednesday, as American Christians gather to celebrate the anniversary of our country's birth, I am hoping we will each take a few minutes to thank Almighty God, to pray to him for a national revival, and to make to him a renewed Declaration of --a humble, grateful, solemn acknowledgement of who God is, what he has done for us, and how much our country desperately depends on him, year by year, month by month, second by second.

Here's wishing you the happiest, most joyful, and most solemn Fourth of July ever! And may we as Americans grow into all that it means to be a nation that identifies itself with Jesus Christ!

Christ Church Carrollton is located on the Square in historic Downtown Carrollton, Texas. Serving the people who live, work, play, pray, and do business here is our great privilege.